A recent property report by Billionaire.com, “The Top 10 Most Expensive Penthouses In The World” listed one of our very own, at No.8 on the list, alongside the usual suspects in New York City, London and Monaco. If you haven’t heard, its just a measly US$47 Million, small change when you consider No.1 on the list was One Hyde Park in London at an eye popping $227Million.

Probably the 1st ever in Singapore to make it onto the pre-ultimate global list of the super rich, Clermont Residences, perched atop the 951-foot-high Tanjong Pagar Centre, designated to be Singapore’s tallest building when completed in 2016, is designed by Skidmore, Owings and Merril, one of the premier architecture firms in the world I understand. The Super Penthouse, one of its kind ever in Singapore, boasts 14,500 square feet of lavish space and promises a spectacular 360 degrees view of the cityscape. What’s more, it comes with 24-Hr Concierge service and a private elevator.  Located in the heart of Singapore’s prestigious Central Business District, Clermont Residences has a location that is truly second to none.

It is perhaps none too surprising given the fact that the developer himself is a billionaire, the Malaysian Quek Leng Chan, owner of the developer Guocoland. Some industry insiders have even suggested that the Super Penthouse was designed for his own use, so that in ever the scenario that it wasn’t sold when completed, he would buy it for himself.

What goes then into the price tag of $47Million? And if you are a billionaire somewhere around the world and reading this, should you buy this to add to your collection? Lets see…

First off, the price. At only US$3241 Per Square Foot (Translated into Sing$4213), this penthouse doesn’t even come close to the priciest PSF price ever paid for a residential property. That honour goes to The Marq At Paterson Hill, a mind boggling $6850PSF was paid in 2011 for the 2950sqft property in Paterson Road, Off Orchard Road. Units at The Marq and Orchard Residences have periodically surpassed $5000PSF since they were launched for sale.

Would you be assured if what you bought was crafted and designed by 2 of the biggest brands in their class? Skidmore, Owings and Merril, the architecture firm behind the mega project, has built more than 5 of the world’s tallest buildings, including the current record holder, Burj Khalifah. SOM has completed over 10,000 projects in more than 50 countries around the world, including many of the major cities such as Birmingham, London, Seoul, Nanjing, Nanjing, Warsaw, Dublin and Lisbon. How about your interiors being designed like a 5-Star hotel? The development helms the Clermont brand, a luxury hotel brand by global hotel chain operator GLH Hotels Management (UK) Limited, a subsidiary of the developer, Guocoleisure Limited. GLH. is the largest owner operator hotel management company in London with over 4,000 hotel rooms. It currently has thirty-six hotels with a total of 8,279 hotel rooms and 337 meeting rooms across the United Kingdom. GLH manages the well-known Thistle brand of hotels and operates The 5-star Royal Horseguards Hotel (renamed The Clermont London), The Grosvenor Hotel, among others. Clermont Residences Singapore brings together the expertise of these 2 global brands in one iconic project. Now thats assuring…

If theres one thing a billionaire needs to shell out $47m for an apartment, its the need to feel special and pampered. Forget about concierge service! Even Ritz Carlton Residences has that! Private lift and pool? Nah… too common. How about the feeling of walking on air? Now that’s special… Featuring for the first time ever in Singapore, Glass Bottom Cantilevered Balconies create the exact sensation. Enjoying the spectacular view from Singapore’s only glass observation AirDecks at Apex is well and truly worth all the money in the world. Hope you are not salivating in your mouth at that prospect already. 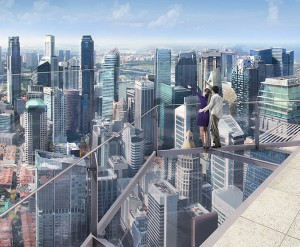 Our next point brings us to the highest point (Literally) of the entire Singapore. At 290m above sea level, when you look out onto the city lights from your extremely high vantage point in the future, be mindful of the fact that you may well be owning the highest ever apartment in Singapore for many many years to come. Height restrictions were set at 280m but somehow, the developer has attained special permission to build an additional 10m higher, meaning the future penthouse will be above current tallest buildings in Singapore, UOB Plaza, One Raffles Place and Republic Plaza. This may well be a one-off as Guoco Tower or better known as Tanjong Pagar Tower was conceptualized by the Government of Singapore more than 15 years since the last Mega 280m building was constructed. Now thats like hitting the Jackpot alright!

And that’s it! I hope I have just convinced you, the global wealthy billionaire that you are, to put in some pocket change ($47 Million Singapore Dollars excluding stamp duties) into our economy. Perhaps the Developer and Government of Singapore could send me a token of appreciation in due course.

The author does not promote the development or project in the article. All the opinion above is strictly of her own.
Original Article @ Copyright – Hazel Tan

Hazel Tan is a writer specializing in the real estate field. She has been writing articles and advertorials for real estate professionals since 2013.

View all posts by Hazel Tan →